'We are all Ayotzinapa': the role of digital media in the shaping of transnational memories on disappearance

Enforced disappearance is a transnational technology of repression, which was implemented during the 1970s and 1980s across Latin America. To denounce this repression, civil society actors have developed particular images, strategies and practices, creating a mnemonic repertoire. While this repression technique was also used in Mexico during the “Dirty War”, Mexico is conspicuously absent in the history – and the memory – of disappearances in the Hispanic World. At the same time, since 2007 over 30,000 persons have disappeared in the context of the “war on drugs”, but it was not until the abduction of the 43 students from Ayotzinapa that the issue of ‘enforced disappearances’ in Mexico gained global attention, triggering protests and actions of solidarity all over the world. The underlying thesis of the project is that this case, which was effectively framed as an ‘enforced disappearance’, activated the broader transnational memory of disappearance in the Hispanic World, which provided content and meaning to the neglected phenomenon in Mexico.The role of the new media in getting citizens’ attention and in marking a “turning point” was crucial to the upsurge of a counter-movement against the Mexican government and qualifies the event as significant for the transnational arena.

Considering digital technologies, transnational actors and the human rights discourse as crucial elements of the transnationalization of memory, the project addresses the following questions: How does digital media foster new forms of political agency? How can we assess the role of new media in the construction of new types of mnemonic objects without subscribing to the thesis of digital memory as a completely fluid and free floating entity? How do global actors make use of transnational strategies to intervene in a local/national context? Can disappearance, as a technology of repression that blurs the boundaries between life and death, present and past, materiality and immateriality, become a model to interrogate the dynamics of digital memory?

An interdisciplinary team, constituted by cultural studies, media and memory studies, art history and law experts will study the role of digital media in the formation of transnational memories of disappearance by approaching three key dimensions:

Theoretical level on the interrelation between media and memory, beyond the specific case study. The aim is to study how personal and collective memories are reconfigured under the impact of digital media. These research questions will be tested in the analysis of the mnemonic objects on disappearance developed in the global sphere (Social Network Sites such as Facebook, Twitter, Youtube) in Mexico´s case compared to those of other Hispanic countries (social performances, literature, photography, cinema, TV).

This section focuses on the socio-political dimension of the conflict. It will do so by following two lines of inquiry: the socio-political contexts in which disappearances took place (relationship between democracy and impunity, totalitarian structures underlying democratic states, debates around “failed states” vs “security failed”, transnational threats) and the networked social movements that aroused in the different contexts to denounce disappearances as human rights violations.

Financed by a Starting Grant of the European Research Council, the Host Institution of this research project (2016-2021) is the KU Leuven. 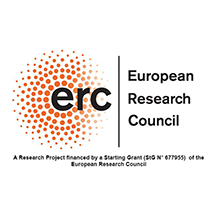 Sophie Dufays holds a PhD in Philosophy and Letters from the University of Louvain (UCLouvain) and is specialist in Latin American cinema and culture. She has worked as a Postdoctoral Researcher at the FNRS (Belgian National Fund for Scientific Research, 2013-2016), as a visiting lecturer at Ghent University, at the UCLouvain and the University of Liège, and as visiting scholar at Stanford University. She is the author of El niño en el cine argentino de la postdictadura (Tamesis 2014) and Infancia y melancolía en el cine argentino (Biblos 2016) and co-editor of two books about the uses of popular songs in Latin American and European Cinemas (published in Libraria, 2018 and Peter Lang, 2019). She has also co-edited two special thematic sections in academic journals (about intimacy and politics in Spanish American literature and cinema, Letras Hispanas, 2016, and about “melodrama and tragedy” in cinema and theatre from Argentina and Mexico, Savoirs en Prisme, 2017).

In the frame of this project, she is interested in the impact of digital culture and resources in the conception and diffusion of audiovisual works produced about the disappeared in Mexico (especially related to the Ayotzinapa case), considering all formats. In particular, she analyses the treatment of faces, voices and landscapes in these works using the concepts of trauma, affect and waste, in order to approach the complex relationship between “memory” and “disappearance”.

Lene Guercke holds a MA in Human Rights from University College London (UCL) and a BA in International Law and International Politics and Peace and Conflict Studies from London Metropolitan University. She is now starting her PhD in Law at the KU Leuven. Her research interests include state responsibility for international crimes, strategies of denial, critical approaches to law, as well as extraterritoriality of human rights obligations.

Within the framework of the project, she is responsible for examining the legal dimension. Her research will focus on the relationship between law and memory (including memory practices) in cases of enforced disappearances in Mexico and elsewhere, as well as on the legal question of responsibility for human rights violations and international crimes in the Mexican context.

Martín Zícari is a PhD researcher in Cultural Studies. Martín completed his BA in History at Universidad de Buenos Aires (UBA) in 2015, with a thesis entitled “Memoria y polémica: la palabra poética en la Nueva Crónica y Buen Gobierno de Felipe Guamán Poma de Ayala” on memory studies and postcolonial theory in the analysis of Peruvian literature. Also during his time at University of Buenos Aires, he was awarded a scholarship from the Ernst Reuter Gesellschaft at the Freie Universität Berlin to complete a research stay at FUBIS programme.

He is interested in the role of digital media in the shaping of social movements. In the framework of the project, his research focuses on the links between artistic actions and political participation in a digital context. Particularly, he is tracing the performance “El Siluetazo”, used in Postdictatorship Argentinean Human Rights movements and lately reenacted in the context of activism related to the disappearance of the students of Ayotzinapa.

Fabiola Navarro has a PhD in Science and Arts for Design from Universidad Autónoma Metropolitana- Xochimilco, and is a research fellow on digital media at KU Leuven. She had a Postdoctoral position at CriDIS/UCL -Centre de recherche interdisciplinaire «Démocratie, Institutions, Subjectivité», Université Catholique de Louvain- (2016) and previously held an academic post at the Department of Science of Communication and Design at Universidad Autónoma Metropolitana-Cuajimalpa (2009-2012). She has an MSc. in Media Arts and Imaging from the Jordanstone College of Art and Design in Dundee University and a Master in Pedagogy from Universidad Panamericana. She holds a BA in Visual Arts from the Escuela Nacional de Artes Plásticas, at Universidad Nacional Autónoma de México and in Science of Communication from Universidad Tecnológica de México.

Her interest lies in the relationship of digital media and citizenship. To determine the role of digital memories in the movement of enforced disappearance in the Hispanic world, she studies the media attributions in a global era as a reinforcement of a civic culture of rights. Emerging from previous social and digital movements, she sees hipermedia practices as vital for social struggle.

Katia Olalde holds a PhD in Art History from the National Autonomous University of Mexico (UNAM). Her research focuses onthe connections that certain artistic practices and forms of cultural activism maintain with the actions of resistance, the grieving processes, and the shaping of dissident memories, which areconducted by a number of civil society groups in contexts of violence and impunity. In her PhD thesis she analysed the public, political and sensitive dimensions of some of the collaborative projects that aimed topublicly display the figures of homicides anddisappearances resulting from Mexico’s so-called ‘war on drugs’ as irreparable human losses rather than abstract numbers or “collateral damage”.

In the frame of this project, she studies the role of the portrait in the digital protests against enforced disappearance, and examines the meaning which notions such as ‘public space’, ‘community’ and ‘direct action’ acquire in the context of transnational collaboration schemes that emerge through the use of social media (working title“From the unburied bodies to the absence of the disappeared. The transition from words to images in #IlustradoresConAyotzinapa”).